As we approach this year-end the time for voting for my article is vanishing quickly.

For those who may not know it yet, the article is participating on a contest that ends tomorrow where there are two places left to enter the finals.

As I'm competing with many "heavy-weight" experienced authors I hope that those who haven't voted so far, decide to give me a friendly hand and vote for it.

Pete
Published by Ultrahead on 10:40 PM No comments: Links to this article

HOW TO: XNA-BASED GAME ON A WEBPAGE

For those of you interested in my article ("Xna & Beyond"), I have -what I consider- an interesting update (btw, don't forget to vote for my article since it's on a compo!).

You may remember that I was trying to investigate how to use the Silverlight technology with XNA. The bad news is that v1.1_alpha does not allow to host WinForms controls; the good news is that v2 -the new name for the final release of v1.1- will do!

I didn't want to wait so thinking more on the problem, I remembered how to embed an .NET assembly into a web page. Digging further into the subject I finally succeded. Read the section The "Silverlight" At The End Of The Tunnel for details and also download the new sample code. 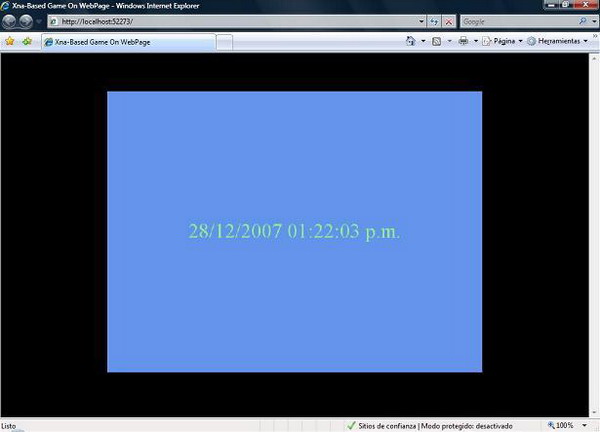 A strong word of warning here: the new example code provided in the article is for learning purposes only. So do not recommend -as I don't recommend it- anyone to modify his/her machine's security giving full trust to any assemblies or websites since it could open the door for security risks.

Maybe I should start and hold a project at CodePlex. I don't know ... we shall see ;)

Well, enjoy!
Published by Ultrahead on 6:11 PM 7 comments: Links to this article

I think I'll be busy tomorrow so I'll post it today: I whish you all a Merry Christmas!

Email ThisBlogThis!Share to TwitterShare to FacebookShare to Pinterest
Tags: Articles, My Blog, XNA

I NEED YOUR HELP, GUYS!

As you may know, a few days ago I submitted an article entitled "XNA & Beyond: The Path To VS 2008" to The Code Project site.

Well, the article has entered TCP's VS 2008 Compo, where 3 out 5 finalists have been already announced and in a couple of weeks the remaining 2 places will be assigned for sure.

Why do I need help? As time goes by, in order to improve my chances to make it into the finals I need more votes, so if you feel like it, can and want to help me, just read the article and cast your extremely high votes ;)

By the way, thanks a lot to the ZMan, Ziggyware, Gamedevkicks, and the folks on the IRC channel for their support as well as all of you who have already voted for my article.

[Damn! I feel like a politician during an elections campaign ...]
Published by Ultrahead on 10:08 AM 5 comments: Links to this article

I have uploaded my first article to "The Code Project" site, which shows how to integrate an XNA-based application into VS 2008 (an implementation for WPF is included) ... read it here.

Also in the article I present -what I think is- a simple solution for embedding your XNA games within a WinForms control; a topic that has been heavily discussed in the (XNA Creators) forums these days.

I hope you find it useful.

Cheers!
Published by Ultrahead on 2:11 AM No comments: Links to this article

Well, having installed XNA GS 2.0, I then downloaded and install the Net Rumble Starter Kit. The process ended without problems so everything looked ok so far.

For my surprise, when I opened VS 2005 Express and attempted to create a new project based on that kit, I found the kit wasn't shown in the IDE's projects browser.

The template was installed under this folder:

So, what to do? After locating the "SpaceWar" Stater Kit template file, I found that both, PC and 360 versions, where installed under a folder named "XNA Game Studio 2.0".

So, I created a new folder under ".../ProjectsTemplates/Visual C#", then renamed it to "XNA Game Studio 2.0", finally moved the "Net Rumble" template file to that folder, and presto!

Cheers!
Published by Ultrahead on 1:08 PM 1 comment: Links to this article

Having done that, I've decided to redesign my XNA-based engine from scratch, and in turn, my "never-ending" entry for the first DBP contest.

Meaning? Things are going to change a lot around here.

Thus, from this year-end and on I'll be posting comments regarding the development of my engine and games, showing pictures and so on (of course, eventually, I'll be also commenting on news -published by other sources- as well as doing some off-topic posts ... not on a regular basis but as exceptions).

My goal: to finish an entry for the main DBP compo.

Therefore, for news regarding XNA, pay a visit -as usual- to Ziggyware (you know it: an excellent site to get news, articles, tutorials, code snippets, watch videos and such).

Email ThisBlogThis!Share to TwitterShare to FacebookShare to Pinterest
Tags: Miscelaneous, My Blog, XNA

FINALLY! GS 2.0 IS AROUND THE CORNER

Yes, at last! The final version of Game Studio v2.0 will be released this December, 13th, that is to say, tomorrow.

Follow this link to Ziggyware to get the links to the press release and the related forum thread. Or also visit Dave Weller's blog to find out more ...

See you all tomorrow.

Published by Ultrahead on 11:35 PM No comments: Links to this article

VIDEOS FROM THE XNA EUROPEAN TOUR 2007

I've followed the links posted by Charles Cox to watch the videos from the XNA ET 2007.

So far, I've listened to Dave Mitchell presentation and some interesting topics cought my attention:

Does anybody know how the 4 winners of the publishing contract are doing with their projects? I'd love to see images or read comments on how their games are evolving in order to go gold.

Published by Ultrahead on 11:25 AM No comments: Links to this article

LOTS OF NICE PRESENTS THIS WEEK

First, more details will be given about the upcoming warm-up challenge.

Second, and maybe the most interesting part of the announcememt -at least for me- and I quote: "... We will have lots of nice presents this week for all you good XNA developers ...".

So, have you been a good XNA developer this year?
Published by Ultrahead on 10:46 AM 2 comments: Links to this article

With version 2.6 of ProFX comes along the respective version of MaPZone editor. For those of you who never heard about these two:

V2.6 of the editor isn't yet available for download but you can get it via 3DWorld magazine.

Now, what about ProFX? If you're using XNA you may have read this announcement: "ProFX to be part of Microsoft's XNA Tool Suite (2007, March 26)" and perhaps got excited. If so, hold your horses. No news, ETA, beta or even alpha whatsoever, just this thread.

Procedural texturing brings a lot of advantages over traditional texturing techniques. To mention a few:

Thus, let's hope the guys from Allegorithmic and the XNA Team meet this week in Seattle to make the above-mentioned announcement become a soon reality.

Published by Ultrahead on 11:05 AM 2 comments: Links to this article

Checking connect entries for XNA I found this one: Physics API.

Following one of the links provided by Mike555, I found a page where the guys behind MS Robotic Studio claim to have a managed wrapper for Ageia's PhysX.

I don't know whether this wrapper is a lite version or not (and by "lite" I mean if it doesn't implement all the functionality available in the original API), but it would be quite handy if the XNA Team could talk to these guys in order to integrate that managed API into XNA.

Possibilities could be endless for our games if that happens.

BTW, and switching topics to the warm-up challenge, let's thank Mykres for listing links to interesting sites that cover AI for games. Check the list out and do some reading.

Published by Ultrahead on 8:29 PM No comments: Links to this article

TO CONTESTS AND BEYOND!

Wow, mate! As we approach the year-end it's as if Santa brings a lot of incredible contests for us to choose. Just to mention a few:

First, we have Ziggyware's "Holiday Contest" when you can win one of the three available DX10-ready gfx cards plus subscriptions to the Microsoft XNA Creators Club, just by writing an XNA-based tutorial or a handy tool to help you develop your XNA creations. Piece of cake!

Second, we have the second edition of the "Dream.Build.Play compo", which includes the "warm-up challenge". Although the main compo's "precious treasure" wasn't yet disclosed, there are great prizes ahead for those who enter the challenge: (a) the possibility of an intership at Microsoft Research, Rare Ltd. or Lionhead Studios, (b) tickets to show your entry at GDC'08, and (c) $3,000.

Third, the "InstantAction Game Developer Contest" organized by GarageGames. The task: to create -at least- a playable game demo by using whatever engine you want. The grand prize: a publishing deal with InstantAction.com plus a lincese to Unity Pro with Asset Server (valued 1,999 american dollars).

Fourth, the ImageCup's "Game Development Competition". If you're a student and love using XNA GS for your game creations -as much as I do- you may find this one is the right for you. Hesitating? Read on: "... Not only will cash prizes be awarded, these winners will then have an opportunity to come to Microsoft and present their entry to the Microsoft games management team for possible inclusion as a download in the popular Xbox LIVE Arcade service or MSN Games Web site. The first place team or individual will also win the opportunity to become an apprentice at Microsoft's Interactive Entertainment Business as part of its internship program ...".

Last but not least -hang on to something, Acclaim's "Project Top Secret". I won't comment on this one because it took my breath away, and I'm recovering, so I'll just quote the following: "The winning Indie Development team, which will develop the game, receives an instant prize of $100,000 and Acclaim will pay the license fees for whatever commercial game engine the team chooses. This combination is capped at $1,000,000. Yes, you are free to use ANY commercial game engine!".

And these are just a few compos. You may find plenty more, just do a google search to be surprised.

But which one suits you and your team? There lays the tricky part ... are you ready to face the challenge? If so, go ahead, choose your compo, and slay the dragon!

Published by Ultrahead on 2:21 PM No comments: Links to this article

Do you want to win the opportunity to be interviewed for an internship with Microsoft Research, Rare Ltd. or Lionhead Studios? How about an invitation to show your entry at GDC 2008? Well then you would also love to cash in 3,000 american dollars.

Yes, the cat is out of the bag now ... you can win all of the above-mentioned prizes if you "... push the limits of Artificial Intelligence while building a game with XNA Game Studio 2.0 ...".

Interested? Then head over the Dream.Build.Play site, read the rules, dates, prizes and start coding! Hurry up! The entry period for submissions starts on December 20, 2007 and ends on January 27, 2008.

[Well Ziggy, one part of the plot is known, so I guess we'll now have to wait for a soon release of XNA GS v2 final ...]
Published by Ultrahead on 12:57 AM No comments: Links to this article

IS THERE A PLOT SOMEWHERE?

Thanks to Ziggyware I read about Dream.Build.Play 2 and the new warm-up challenge scheduled to start this Dec 8th, 2007, that is, tomorrow.

Now, the XNA Team guys have previously announced that XNA Game Studio 2.0 Beta Program would end today, so is it me or something is being cooked right now??!!!

Published by Ultrahead on 10:43 AM 2 comments: Links to this article