THE CAMPAIGN FOR THE APE IS NOW LIVE!

The campaign for the Asset Pipeline Editor is live at http://igg.me/at/theape

Hope you guys find it attractive and decide to contribute either financially and or by helping me spread the word.

Cheers!
~Pete
Published by Ultrahead on 4:06 AM No comments:

REGARDING THE FUTURE OF C# ...

I'll be out of office for a few days and before I go let me post some words about the features I'd like to see implemented in upcoming versions of C# (btw, on my return I'll be posting again about The APE).

A couple of weeks ago on "This Week On Channel 9" series there was a reference to Mads Torgensen's presentation in London regarding "The Future of C#", announcing new features that could probably get implemented in C# 6.0.

So, in this post, let me explain some of the features that I hope they implement in C# in the short/middlle run:


I talked about this many times, but I think it's a perfect time to mention it again.

So far, if you want to compile MSIL to native code at once, you can use a tool called NGen, which creates a native image of the code for the machine where compilation is being done. The problem with this tool is that its main purpose is to reduce startup times. Meaning? You won't get optimized bits for the whole code; just for the blocks first executed when the program starts.

Imho, we need more ... in this relatively new world of app marketplaces it'd be really handy to count on a model where you can deliver optimized native bits to the device/console/machine where the app would be downloaded and installed, don't you think?

Picture it like this: say you create an app/game with C# for the XBox One (using portable assemblies or not) and compile your source code to MSIL. Since the hardware of the console is the same in terms of main components (processor, memory, etc.) then why not compiling the whole MSIL code to native bits optimized for the Xbone console at once? (either on your side or on MSFT servers' one)

With a LLVM-Like compiler this could be achieved and extended to other platforms. But wait a minute! Isn't it what MSFT is doing for WP8? It sounds like it. But wait a minute, again! Isn't it something like the AOT compilation that can be found in the Mono Framework? If the latter gives optimized bits for whole assemblies per platform then it is!

In fact, many sources mentioned the so colled "Project N", which would be used to speed up Windows 8.1 apps. What is more, a few sources also mention that MSFT is working in a common compiler for C++/C#. I hope it also brings a more performing way to do interop stuff with C++.

True or not, this is a "must have" in order to end the C++/C# perf discussion!


In modern HW architecture, SIMD has become a standard when you want to boost performance in specific operations, in particular, ("vectorized") mathematic ones.

As a mather of fact, C++ counts with DirectXMath libraries (based on the formerly called XnaMath ones) which do implement SIMD, but unfortunately do not support C#.

Again, SIMD is already present in the Mono Framework for Math operations, so why not adding it to the .NET Framework once and for all?


We have extension methods, so this is a corolary of it. Today, you can only implement getters (and setters) like this:

public static string NameToDisplay: IPerson person
{
get { ... } // You could also add a setter, if needed.
}

Of course that the syntax in the example above may vary, so I guess you get the idea here. There are several use cases where a feature like this could come handy, including MVVM or plain INotifyPropertyChanged ones.


Generics is one of my favorite .NET features. There's lot of things that can be achieved through it but it has still room for improvement.

One of the things to improve are constraints. So far, when dealing with types of software elements, we have only two: class and struct. So, what about enums?

Currently, if you want to mimic an enum constraint you will have to write something like ...

... and also, given that you are dealing with a subset of elements that approximate to an enum, you need to check whether and enum has been passed, generally throwing an exception if not:

if (!typeof(TEnum).IsEnum)
{
throw new ArgumentException("The passed type is not an enum");
}

Not only it makes sense, but also would simplify things a lot as well as open a wide range of handy operations and extension methods.

.NET's CLR treats structs in a special way, even though they have a base class: ValueType.

I'll not be explaining here the characteristics of built-in primitives and structs; instead, I'll ask the following question: in the current version of C# can we achieve something like this ...?

The answer: not without proper casts. So, a life changer for this type of situations would be to add a specification of ValueType that enjoys the benefits of structs and also supports basic math operations without any kind of wizardry: NumericValueType.

With that class and a new reserved word like, say, "numeric", "number" or "primitive", we could write generic operations and extension methods with a syntax as simplier as:

How about declaring new type of numbers? Easy ...

No need to specify "struct" since "numeric" would be a value type that supports basic math operations (that we would need to implement when we declare the type, maybe, by overriding some base operations), and so in common scenarios there would be no need to cast values to do math.

6. Declaration of Static Operations On Interfaces


Put simply: having the possibility of declaring static operations when writing interfaces; like this:

This presents a challenge to both, polymorphic rules and abstract declarations, that is, at a "static" level. But as usual, with the proper rationale and care when modifying the language specs, it could be achieved. Maybe, many of you would be asking: "why bother?" but believe me when I say that I happened to meet situations where static operations on intefaces would have come really handy.

Well, this is it for today. What would you guys like to see implemented in C# 6 and beyond? Comments are welcome.

See ya when I get back,
~Pete
Published by Ultrahead on 5:48 AM 2 comments:

After a short break to do some marketing about the APE (sigh!), it's time to resume posting so the turn goes to a couple of recent additions I implemented into the core functionality:

These features have been requested by some of you, so here they are ...

In part 4 of the series I mentioned that there were two actions when compiling assets, the first one was "build" and the second one "copy/move", and the way to indicate whether to copy or move assets was by (un)checking the following checkbox: 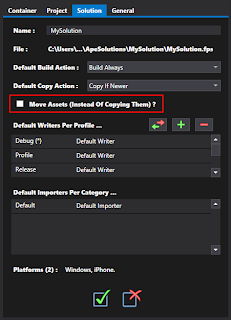 Well, as a corollary of the command-line tool "APEBuild", a new third option may take place: direct build. Now you can indicate the APE to compile assets directly on the output folder instead of doing it on the "local" folder. In short, it's a way to reduce steps. No need for move or copy. 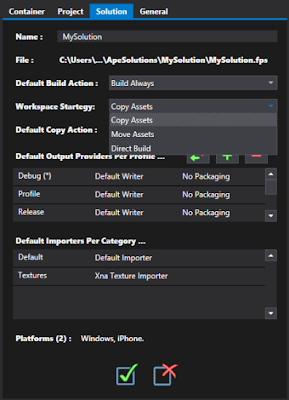 So, you will have three options from now on: "Copy Assets", "Move Assets" and "Direct Build". Needless to say that the "Default Copy Action" field ("Copy Always", "Copy If Newer" and "None") will be only enabled when "Direct Build" is disabled and that this feature can also be used with APEBuild.

In the picture above, if you look at it carefully, you will have a preview of what I'll talk next ...

Throughout the years, as a moderator in the creators' forums, I read many questions regarding the possibility of zipping your whole content folders. Recently, it has been brought to my attention (thanks again Javier) that some authorware offers the possibility of compressing all output into a single zip file.

Guess what? Now you can also do it with the APE!

How come? Simple ... you create your own packager (where you can use any of the compression techniques available in .NET 4.5, use third-party libraries or add your-own compressor) and when you plug it into the APE, the latter will show it as an option on the General Settings tab: 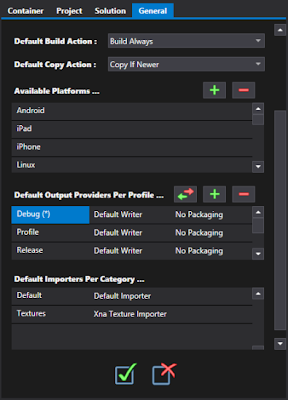 By default, as usual, there is a "pass-through" packager built-in, named "No Packaging", which we can use for the cases where no zipping is required.

So, when you create/load a solution, its panel will look like this: 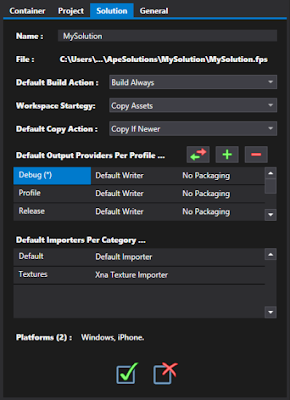 We can then select the packer along with the writer to set as the default one for the solution (which of course, can be overriden per project). But that is not it ... 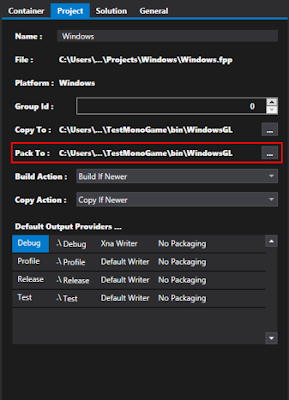 The picture above shows a new field to set in the Project Settings tab: "Pack To". By default, that field will initially equal the path assigned to the "Copy To" field, that is, the output path.  But you can change it, in case you need to have a different target directory for the zipped file.

This opens a new set of possibilities since selecting a packager won't disabled copy/move operations, and vice versa. So, if you decide to copy assets and also create one huge compressed files for the whole structure, you can set a different path for the packed files and presto! Do you want just the packed files? No problem, set either the direct build or activate copy/move actions with "None", and you will only get the zipped file.

Please notice that the packaging action is meant to apply to a whole structure of assets and not to each asset individually; in other words, alike assets writers -which affect each raw file individually as part of the import/export process even though they are applied per project, asset packagers affect a structure of folders and asset files per project. Say you have a folder named "Content" with all the asset files built in the last execution of the command, then this folder is the one the packager will take as a reference to create and output the compressed file (or the compressed files you decide to output). 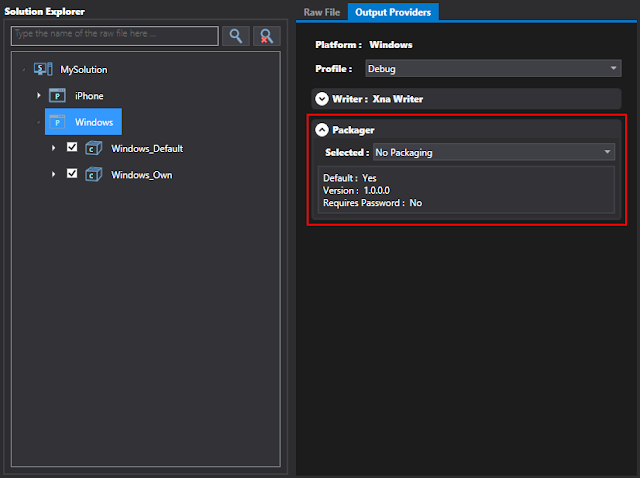 Last but not least, the "Writers" tab has been renamed to "Output Providers" given the fact that it now includes a configuration panel for packagers, where you can select the packager to use per compilation profile and configure its properties, if any is available.

In the example above, no packaging is set for the Windows target platform and the "Debug" compilation profile. Plus, since this default packager is a pass-thorugh one, there are no public properties you can tweak.

And again, this feature is automatically included in APEBuild!


With these two additions, the APE now covers several use cases: from usual ones to the weirdest! Thus, I am eager to see what you guys come up with when the first released version of the APE gets launched ...

Btw, I continue working on this handy solution as we speak, so new and exciting features are added on a daily basis.

We are close to start the campaign at IndieGoGo so I hope you stick around!!!

'till next post,
~Pete
Published by Ultrahead on 1:45 PM 2 comments: